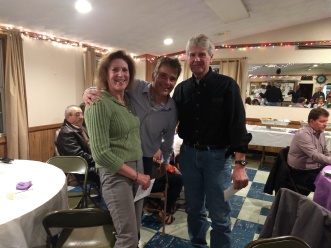 Pat and Stan have been inducted into the 2019 RI Road Runners Hall of Fame.

Two peas in a pod. Pat and Stan joined the club in 1990 and have been tearing up the
roads ever since. These RIRR stalwarts having been racing in tandem for so long they have
completed over one thousand races together (and still going)! Their first race in 1985 was the
Wickford 5k Memorial Day race and since then they have been racking up the miles not only
on the roads but through the trails of New England.

Stan bought his first running shoes from Bobby Doyle himself at his store in Pawtucket
back in 1980. Their first marathon in 1991 was undercover running as bandits in the Boston
Marathon.

Since hitting their prime for awards in the 60 year old age group, politely referred to by
Pat and Stan as the “Old Battleaxe” awards, the duo has been cleaning up in that age category.
Kudos for them for hanging in on the running circuit and to be able to compete at an age when most people have hung up their racing shoes.

You can always meet up with them at their usual races, which by the way they’ve run many
times over: the Blessing of the Fleet, St. Mary’s 5.5 miler and the East Providence Turkey
Trot.

This dynamic duo shouldn’t be hard to find – look for the twin towers with smiles on their faces.