Hall of Fame Inductees for 2014

Harry Carter was accidentally roped into running by his co-worker Dick Godin at age 58. That was a good thing because he has not stopped ever since.

His records are nothing but impressive. In his earlier years, he clocked a 19:53 in a 5K and 3:25 in marathon. In 2005, Harry won his division in the Hyannis Half Marathon finishing in 1:36, and in the New Bedford Half Marathon with a time of 1:33.

He was inducted into the Hall of Fame at the New England 65 Plus Runners Club in 2010 and was featured in many local newspapers such as the Milford Daily News. Harry is definitely a celebrity in the local racing community. Everywhere he goes, there are always people greeting him. He always politely returns their greetings, but trust me, he has no idea who most of those people are.

Harry deserves to be nominated to theRhode Island Road Runners Hall of Fame because he is a truly great athlete with a generous heart. I have gotten to know Harry pretty well ever since he and I began running together. He was always encouraging my passion for running and always generous with his advice. Once, after a poor race performance, I was complaining to Harry about my slow time. He reminded me that races are all about going out there and doing your best, and enjoying the time spent with your fellow runners. The time is secondary. I guess it is easy for him to say that, since he always swept his division, but he reminded me, what running is all about.

Have I mentioned that Harry is originally from England? He came to the United States over 47 years ago with his wife, Margaret. He definitely has not forgotten his roots nor his accent. His favorite drink is Boddingtons and favorite food is fish and chips. One of his proudest achievements was his third place finish in his division in the London Marathon. Harry is an amazing athlete and an inspiration to all of us 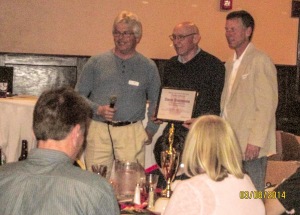 A veteran runner who is often competing on the half marathon circuit, Dave is best known for creating and organizing the longtime Red Rooster Ramble, a popular five-mile series that takes place each Thursday night (usually from early April to the end of August) through the roads of Warren and Barrington and will hold its 300th race in 2014. Dave is also a past RIRR president who, entering 2014, has won Ironman awards in 11 of the last 13 years and New England Cups in 12 of the last 13. He has also run in over 1,100 races, and a sixth of them has been – you guessed it! – half marathons.

Dave joined the club following his relocation to Fairhaven, MA and immediately began his volunteer work on behalf of the club.  His pre-dawn arrivals at Scarborough and late night results tallying at the Red Rooster Ramble epitomize Dave’s drive and conscientiousness in order to provide a better running experience, but more importantly a better MEMBERSHIP experience for all of us.

While many of us have volunteered at road races over the years, and some of us even been race directors of an annual race for perhaps a decade, Dave has directed over 200 races now and adds over 20 a year to his unheard of total.

Dave is a true club ambassador and an important reason why the club thrived through the years he held office. 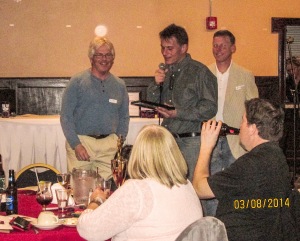 One of the greatest Clydesdale runners in RIRR history, John has done it all. He entered 2014 as an Ironman winner in 12 of the last 13 years and placed in the Grand Prix standings in six of the last nine years. He also has been a consistent top-five finisher in road races that offered a Clydesdale division. John has also helped out with the club in numerous areas, is a past RIRR president, and is the organizer and force behind one of R.I.’s all-around best summer races, the Common Fence Point 5-Miler.