Hall of Fame Inductees for 2012

As a RIRR, Leo did much to solidify the club. He hosted Wednesday night runs during the “dark” season (Nov.-April) from his home in Johnston, and beginning with the “Rich Classic” club, he joined other leaders in the transition to the current RIRR of this day.

MONROE ALLEN
Monroe is one of the best examples of a universal mentor that the RIRR could possibly be blessed with. He generously shares his experience as a “lifetime athlete” with anyone coming into his presence, especially the Wednesday night runners who have gathered at his and Anne’s house on East Gate Road for some 25 years, preceding the transition of the Rich Classic to the now RIRR running club.

A standout on Brown University’s track and field and swim teams in the early 1950s, Monroe resumed running at the age of 47, qualified for the 1983 Boston Marathon at 53 with a personal-best Newport Marathon finish of 3:09, and finished in 3:15. As a RIRR, he continued to compete in area races and usually was an age group winner.

His running career has transitioned to triathlon competition over the last 20 years and included over 100 triathlons since 1980, including National Championships in St. Louis and Internationals in Canada (eighth-place finish), Puerto Rico, and Seoul, So. Korea. 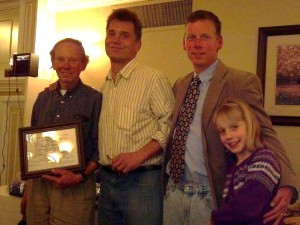 FRED ZULEGER III
His running career began in his late 30s and started with a simple 5-mile race in West Warwick in 1977, and since then, Fred hasn’t slowed down! He has run in over 2,000 races in his brilliant, storied career  — reaching the 2,000-race mark in Oct. 2009 at the Brendan Doyle 5K in Pawtucket and averaging 66 per year. Fred has also run in several international races, such as the Berlin Marathon in 1990, and he has run in 31 marathons and qualified for Boston 11 times. Running Times wrote a story about Fred in its Sept. 2010 edition.

Fred’s contributions to the RIRR are numerous. He was a member of the “Rich Classic” club that soon tranistioned into today’s current RIRR, and he has held every position in office, including being a former president.